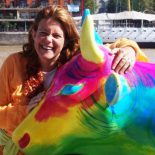 Travel and a bit of shopping

The fort near the fishing harbour of Djerba

The roof of a mosque

Blue doors have been the custom for centuries

Chunky slices of baguette are served with every meal – including breakfast – accompanied by harissa, a smoky fiery traditional Tunisian paste made from chillies, cumin, garlic and coriander.

Tunisians seem to take a baguette or two, three home every day. On one occasion a little Italianate delivery truck whoozes past me with baguettes stacked to the vehicle’s ceiling. On the passenger seat baguettes sit in a basket as if giving directions to their restaurant of choice.

To Tunis or not to Tunis

Tunisia offers blue and white Mediterranean seaside villages, oriental souks and the Sahara desert with its oases to the south. Tunis is mostly overlooked as a destination to be included on your itinerary when visiting this sliver of a country.

If you do find yourself in Tunis, Ville Nouvelle – the ‘new city’ built by the French – has little charm if you are looking for a quintessential experience.

But Avenue Habib Bourguiba leads straight into the medina, the walled old town. Most tourists choose the route down Rue Jemaa ez Zitouna once they have entered the medina at Bab el Bahr (Sea Gate). This narrow alleyway in the bazaar takes you to the Zitouna Mosque – dating from 732 AD – in the centre of the souk.

A day spent in the pleasant cacophony of the Tunis souk defines the Tunisian way of life of centuries ago. It’s utterly delightful to purposefully get lost in the hustle and bustle of stalls amid the blue studded doors and labyrinthine alleyways. Occasionally an elderly gentleman in faded djellabah and tasselled fez will shuffle past minding his own business. Unexpectedly the hauntingly beautiful call for prayer will start at one of the many mosques and thereafter imam after imam adds his sonorous voice.

Generally you will find better prices – and less of the ubiquitous sales talk – in the rest of Tunisia. In souks all over Tunisia – with the exception of Tunis perhaps – females might be offered any number of camels for their hand in marriage. This offer usually takes place as part of the inevitable chit-chat when interest is shown in leather sandals, embroidered cushions or brightly painted ceramics.

The Bardo Museum is definitely worth a visit

Whilst in Tunis a visit to the Bardo Museum – housed in the former palace of a bey (Turkish sultan) – with its unsurpassed collection of Roman mosaics provides an understanding of the history of this part of the world. The mosaics depict – amongst other things – hunting, rural life, the ocean and its inhabitants (including sea gods and nymphs), and gastronomic feasts.

Apparently the zigzag patterns on the borders of the mosaics have been copied by carpet weavers. It sounds feasible but – then again – it could also be part of the sales pitch in the souk.

Perched on a hill

Sidi Bou Said is a 20 minute taxi ride – taxis are plentiful and affordable – from Tunis.

Sidi Bou Said is probably one of the prettiest village on the planet. Imagine a pristine cobbled hill-top town with a stupendous view over the Gulf of Tunis. This little dorpie was closed to non-Muslims until the 1820’s. 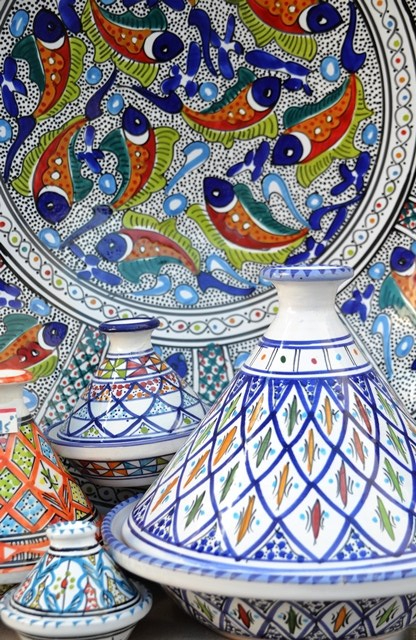 The view is particularly superb from Cafe Sidi Chabaane aka Cafe des Delices.

Cafe des Nattes offers a more authentic experience – even more so at night when all the day trippers and ocean liner passengers have gone. Kick off your shoes, lounge on grass mats and marvel at the giant copper samovar; then beckon the moustachioed waiter over to ask for mint tea with pine nuts.

None of the buildings in Sidi Bou Said is taller than the minaret of the mosque. Filigreed shutters, curlicued window grilles and wood-enclosed balconies known as mashrabias are cerulean blue. It is believed that blue keeps mosquitoes away.

Vendors sell single posies of fragrant jasmine blossoms; older and younger male Tunisians tuck these posies behind their ears; it seems to result in a slightly exaggerated swagger in their step.

Djerba (or Jerba) is an island off the south-east coast. Djerba was ruled by pirates centuries ago and is a treasure trove of history. 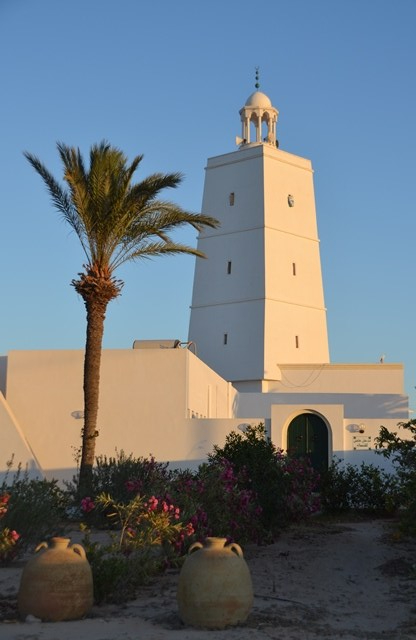 The capital of Djerba – mostly visited for its souk – is, predictably, called Houmt Souk (it means market place). It’s a maze of little Aladdin’s Caves. Apart from the souk and its wares there is much to see inland.

Pretty white round-domes mosques are dotted across the dusty island and its date palms and olive groves. On the sea front of Houmt Souk stands the 13th-century fort, Borj el Kebir. The fishing harbour – with its stacks of gargoulettes, the terracotta pots that are lowered onto the sea bed to catch unsuspecting squid and octopus – is a 5-minute walk away.

For decades Tunisia has been a popular destination. Since December 2010 tourism has died down to a trickle though it’s picking up again. Make your way whilst it’s still aslumber before it – inevitably – picks up again to frenetic volumes precisely because it has so much to offer. 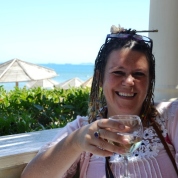 In Tunisia you do what the Tunisians do

Off to a henna ceremony we go

This entry was posted on February 8, 2019 by ilsez in Africa and tagged Tempting Tunisia.

Looking for one of my blogs? Search here: