Travel and a bit of shopping

An old 18th century fort that houses a 500-ton winery. Two 18th century homes, both national monuments. A manor house that once was the shooting lodge of Lord Charles Somerset, governor to the Cape in the early 1800’s. 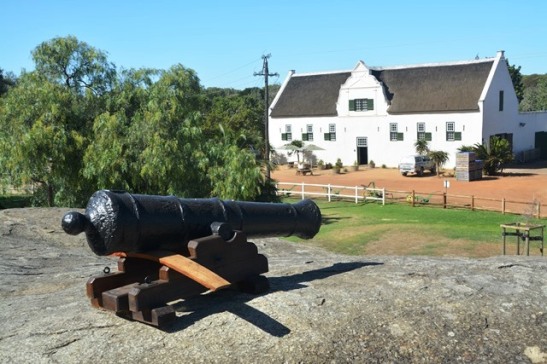 A cannon from yesteryear

Away from the hustle and bustle of the city and the wineries on its doorstep. There’s something romantic about having to drive along a corrugated dirt road to get to a wine farm with its own game camp. Speaking of which, in 2014 the game drives on this farm received the Klink Wine Tourism 2014 Award for Most Unusual Attraction on a Wine Route.

The paraphernalia in a wine cellar

Red wine in the making

A unique terroir where grapes ripen slowly under a curtain of cool mists from the Atlantic Ocean.

A working yet atmospheric cellar

All of this – and so much more – is Groote Post.

Groote Post even has its own mountain, Kapokberg. Kapok is Afrikaans for light snow or frost. The name stems from the white daisies that cover the ‘mountain’ or hilltop in flower season (from August till the end of September).

Groote Post is about an hour’s drive from Cape Town – along the R27 known as the West Coast Road or via the R307 out of Darling – and 17.5 kilometres out of the town of Darling itself.

It’s close enough for city folk to drive out – on the last Sunday of the month, in summer only – to the immensely popular Groote Post country market for the day. The market focuses on local produce: home-baked breads, cheeses and charcuterie, sauces and preserves, ever-popular pomegranate products, traditional toffees from Darling Sweet and organic mushrooms. Not to forget good ole’ Weskus-wors as well. Everything at the country market is local and everything is lekker. Live music sets the tone and all the Groote Post wines can be tasted or bought by the glass, bottle or case. In addition craft beers from Darling Brew are also available. 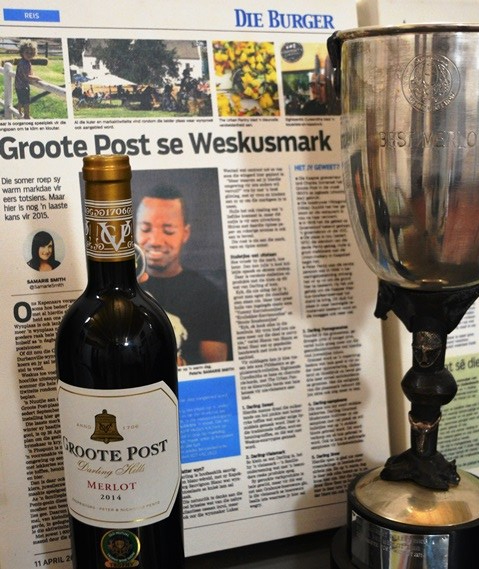 The farm of Groote Post has had a long history: from 1808 when the manor house was built to 1972 when the Pentz family bought the farm.

Back in the day Hildagonda Duckitt, author of Hilda’s Where Is It?  and Hilda’s Diary of Cape Housekeeping – her father Frederick Duckitt bought the farm in 1838, two years before she was born – described the Groote Post manor house as a ‘dear old home’. She also told of how ‘on a whim’ carpets would be rolled back, music would start up and everyone would enjoy ‘an impromptu dance’. Hildagonda, known as Hilda, wrote one of the first truly South African cook books when she wrote Hilda’s Where is it? in 1891.

Today the restaurant at Groote Post is called Hilda’s Kitchen to honour Hildagonda Duckitt and is housed in the old house with seating outside on a shady terrace or inside next to the fireplace on a chilly day. At Hilda’s Kitchen you enjoy country-style cooking using predominantly local products; the menu changes daily and the dishes complement the entire range of Groote Post Wines.

In the 1990’s the historical track of the farm changed somewhat when Peter Pentz made the decision to sell his famous Holstein herd and to change from a dairy farm to a wine farm, planting 117 hectares of vines. And the rest is history, as they say.

This entry was posted on April 13, 2019 by ilsez in English foodies and tagged Go big at Groote Post.

Looking for one of my blogs? Search here: